Strong growth from streaming and vinyl, as the British public turned to music during the lockdowns, more than offsets the impact of the pandemic. 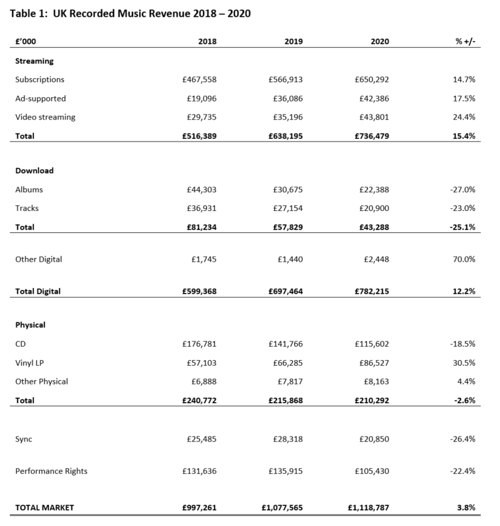 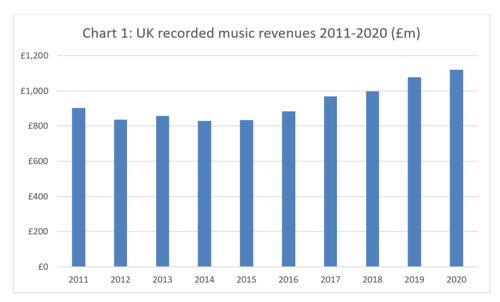 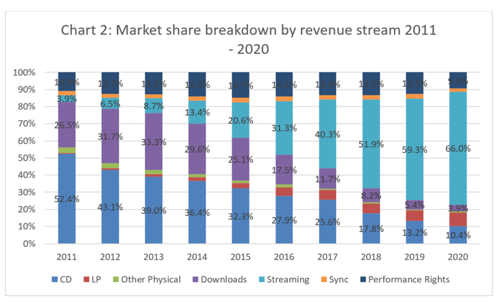 Strong growth from streaming and vinyl, as the British public turned to music during the lockdowns, more than offsets the impact of the pandemic.

The BPI, the association of independent and major record labels, today reports that UK recorded music revenue1 rose by 3.8% in 2020 to reach £1.118 billion.

Revenues from streaming fuelled much of the rise, growing 15.4% to £736.5 million, even as the pandemic slowed overall growth. Physical revenues decreased only marginally by 2.6% to £210.3 million – helped by the spirited response of independent shops and specialist chains and their loyal customers to the lockdowns.  Climbing revenues from vinyl, boosted by online campaigns and purchasing, increased by nearly a third (30.5%) to £86.5 million – the highest total since 1989.  This helped to cushion reduced CD sales income, which, though still resilient, fell by 18.5%.

Heightened demand for music among the UK public during the lockdowns, which as reported by the BPI in January3 grew by 8.2%, under-pinned the overall growth in revenues.  It also underscores the appeal and success of British artists, including a new generation of UK rap, hip hop and dance talent that is harnessing the reach and immediacy of streaming to achieve tens or hundreds of millions of streams annually, and forging successful careers in music.

These revenues enable record labels’ continued investment in artists and in new music, and underline how in 2020 recorded music will have helped to support many artist incomes during the pandemic.

“The lockdowns inevitably affected financial results in 2020 but, unlike other parts of our industry which were hit very hard, the seamless connectivity of streaming and the enduring love of vinyl meant that recorded music was relatively insulated from its worst effects, and was still able to post growth.

“The ongoing increase in paid subscription streaming fuelled labels’ ability to continue investing in artists. The safe and rapid reopening of live venues is the music community’s critical first priority, but the resilience of recorded music demonstrates the important role it plays in people’s lives even in the midst of the COVID pandemic.”

Revenue from downloads continues to decline as substitution accelerates towards streaming. It fell by 25.1%, with downloaded albums generating just £22.4 million (down -27%), and tracks contributing £20.9 million (-23%).

Vinyl remains a star performer, contributing £86.5 million to revenues in 2020, up by 30.5%. Purchasing of physical formats largely shifted online in response to the lockdown challenges, with demand boosted by campaigns such as LoveRecordStores as well as more established annual promotions including Record Store Day, National Album Day, and HMV Vinyl Week. The growing number of direct to consumer (D2C) sales of physical products also added to the revenue figures.

Annual income from vinyl is now closing in on CD revenues, although the latter format, which next year celebrates its 40th anniversary, still generated over £115 million (-18.5%) to underline its continuing resilience and importance to labels. Sales of other physical formats, notably cassette, which saw over 150,000 units purchased in 2020 – the highest total since 2003 – yielded £8.2 million in revenues, up 4.4% on the year.

“Vinyl’s exceptional performance despite retail lockdowns confirms its role as a long-term complement to music streaming. 2021 is likely to be the year in which revenues from LPs overtake those from CDs for the first time in well over three decades – since 1987. In addition to the immediacy and convenience of streaming, fans want to get closer to the artists they love by owning a tangible creation, and more and more of them are discovering how vinyl, or lovingly created CD box-sets, can enhance their experience of music.”

Revenues from ‘Sync’ and Performance Rights

Sync – music used in film and other soundtracks and in advertising – has been an area of revenue growth for labels in recent years, but stalled in 2020 given the profound effects of the pandemic on film production and screenings, yielding £20.9 million (-26.4%). Income from performance rights remains substantial at £105.4 million, but, again, was unsurprisingly down by over a fifth (-22.4%) on the previous 12 months as a result of the severe impact of lockdowns on nightclubs, retail and other areas of public performance.

“The long-term closure of nightclubs has attracted less media attention than festivals and live music, but they are also very important to music fans and to the music community culturally and socially, contributing a valued component of artist, songwriter and label income. Their safe return as a vibrant part of the Night-time Economy is something we must all work hard to achieve.”

A new wave of UK talent is rapidly joining more established British global stars to excite fans and drive music consumption. D-Block Europe, Aitch, AJ Tracey, Headie One, J Hus, KSI and Nines, plus artists Joel Corry, Jax Jones, Gerry Cinnamon and Jorja Smith are just some of the names forging successful careers thanks to the global reach of streaming, and in 2020 nearly 200 artists were streamed over 100 million times in the UK. Label investment in new music underpins much of this virtuous cycle of growth.

1 Record label revenues comprise income generated through streaming, purchases of music across physical and download formats, public performance rights, and ‘sync’ – music licensed for use in film & TV, games soundtracks and advertising. The BPI figures are based on a survey of its record label members, with Official Charts Company market share data used to account for labels who are not BPI members. They are verified against data collected by the IFPI. The growth is in line with the trend of recent years and is the highest annual amount that includes sync and public performance revenue since 2006, when the combined total was £1,166.2m. Record company earnings from public performance rights are generated by the broadcast and public performance of recorded music – the figures presented represent income collected on behalf of producers (i.e. record labels and not artists).

2 Please note that sync and performance revenues only go back to 2006, which means that annual revenues from sales and streams of music alone are still 19% less than they were at their peak of £1,232m in 2001.

4 Ad-funded streaming income grew by 17.5% to £42.4m.  2019 figures have been re-stated (from £1.069bn reported last year to £1.077 billion) in order to allow like for like comparison following additional revenues being reported in this category.