Official figures released by record labels’ association the BPI, based on Official Charts Company data1, show that recorded music consumption in the UK rose by 8.2% in 2020, with 155 million albums or their equivalent either streamed or purchased by fans.2

The increase in consumption was achieved despite the disruption caused by the Covid-19 pandemic, which has had such a devastating effect on the live sector.  Demand initially dipped around the start of the first lockdown, but listening rebounded across streaming and physical formats and grew throughout the year.

This year’s Top 5 albums: 8 of the top 10 are by British artists (see Notes for Official Charts top 10s in full)

With nearly 200 artists achieving over 100 million streams or more in the UK over the past 12 months, their success contributed to an overall total of 139 billion audio streams in 2020, up by more than a fifth (22.0%).3

Streaming now accounts for four-fifths (80.6%) of UK music consumption, with people of all ages using it for their daily music choices, but also collecting their favourite albums on CD, vinyl and other physical formats. A new wave of artists, who are harnessing the global reach of streaming, are each generating hundreds of millions of streams in the UK alone.  Backed by rising label A&R investment, which in 2019 rose to above £250 million, and creative marketing, these new stars know how to unlock the potential that streaming offers to achieve chart success and to forge a successful career.

Major established artists such as Ed Sheeran, Adele, Stormzy, Dua Lipa, Harry Styles, The 1975, Lewis Capaldi, Calvin Harris and Arctic Monkeys have been joined recently by the likes of Mabel, Dave and Jorja Smith, as the next generation of diverse British talent – drawn increasingly from rap, hip hop, dance and other genres – is emerging fast.  Acts including D-Block Europe, Aitch, AJ Tracey, Headie One, J Hus, KSI and Nines, plus dance artists Joel Corry and Jax Jones, IDLES and Sports Team, Tom Speight and Scottish singer-songwriter Gerry Cinnamon are just some of the exciting new names that are finding new audiences largely through streaming.

Geoff Taylor, Chief Executive BPI, BRIT Awards & Mercury Prize, said:  “A new wave of British talent is capitalising on the immediacy of streaming to achieve fantastic success, measured in the hundreds of millions, even billions of streams. Record labels are investing heavily in new artists to secure the future of British music, boosting the UK’s exports and soft power.”

“The performance of recorded music in 2020 was remarkable, and reminds us how important music is to our country, even when our lives are disrupted. But any satisfaction we can take is tempered by the devastating impact of the pandemic on live music. Recorded music is only one element of artists’ incomes, and we renew our calls on government to support our culturally important venues, nightclubs and festivals until they can safely reopen.”

Streaming has made access to music easier for fans, but also increased competition for attention – and popularity remains the key driver of commercial success

Streaming has made it easy and affordable for fans to access more music, and also for more artists to reach more fans. At the same time it has recalibrated success. The top 10 streaming artists in 2020 each achieved over half a billion streams in the UK alone.  But below them in the top 200 there were many artists achieving more than 200 million streams, while further down still, even artists ranking between 500th– 1,000th achieved between 43 million and 21 million UK streams.  A million streams may sound a lot out of context, but 8,000 different acts now exceed this threshold annually.

The market has become much more competitive, with many more artists able to access distribution and streaming platforms. Even at the lower end of streaming volume has surged, with more than six times as many artists achieving 100,000 streams as the equivalent number of sales in 2007. This means competition for consumer attention has intensified, requiring 24/7 fan engagement and marketing. And this is where labels are stepping up with £250m of A&R investment, helping British artists to continue to lead the world.

Geoff Taylor added: “Streaming means that there are many more artists active in the market than ever before. This is great news for fans, but means that it is harder than ever for artists to achieve success – so that continued support and investment from record labels in marketing and production is crucial."

As recently reported by the BPI, whilst the continued growth in streaming underpinned much of the rise in consumption, the remarkable performance of vinyl, which jumped by over a tenth (11.5%) to almost 5 million (4.8m) copies purchased – representing a 13th year of consecutive growth – confirmed the enduring appeal of the format.  The continuing revival of the audio cassette, which almost doubled (94.7%) in sales to 156,542 copies – the highest total since 2003 – also demonstrated the fan appeal of music in tangible formats as a complement to streaming.

Demand for CD continued to reflect long-term trends, but, with 16 million copies sold representing 10.3% of recorded music consumption, the format continues to show its resilience and play a key role in shaping chart success. Physical remains a ‘kingmaker’ for No.1 albums: in the majority of weeks (28) in 2020, it accounted for 50% of chart-eligible sales of the Official Charts No.1 artist album.  Digital albums also continued their long-term trend, down by 19.0%, but they still contributed 5.9 million unit purchases to the overall AES total.

Drew Hill, MD Proper Music Distribution, said: “Once again physical music is proving the kingmaker in chart success, with over half of this year’s No.1 albums boasting a physical sales majority. As we celebrate this streaming boom, it’s important we also remember the ongoing fan demand for something tangible, and recognise that streaming and physical music coexist quite happily.”

Eight of the best-selling artists on album format were British, led by Lewis Capaldi, Harry Styles and Dua Lipa – all three of whom also achieved nearly half a billion streams or more in 2020 in the UK alone and billions more streams globally. Their chart success made it an all-British Top-34.  See Charts in Notes.

It was another hugely successful year for Lewis Capaldi, reinforcing his arrival as a major new force in music – his debut album Divinely Uninspired To A Hellish Extent finishing 2020 as the best-selling album of the year, as it did in 2019. The album was also the sixteenth best-selling album on vinyl this year, and the Scottish singer also saw success in the best-selling singles chart, with Before You Go and Someone You Loved, which won Song of the Year at the BRIT Awards 2020.

Harry Styles can also celebrate a successful 2020 as a fully established global star, with his album Fine Line finishing up as the second biggest-selling album of the year. Released at the end of 2019, it was also the fifth biggest selling title on vinyl, fuelled by popular singles Watermelon Sugar and Adore You, which finished at tenth and sixteenth respectively in the end of year Official Singles charts. As well as being nominated for two BRIT Awards at the start of the year, Harry was nominated for three Grammy Awards in November.

Dua Lipa continued her rise to pop superstardom, with her album Future Nostalgia the third best-selling album of the year, and the top seller released in 2020. Her self-titled debut album also featured in this year’s top 25. The three time BRIT Award winner also saw success in the end-of-year singles chart, with Don’t Start Now, the lead single from Future Nostalgia, being the sixth best-selling single of 2020, while Physical also featured in the top 20. The album also shifted significant quantities of cassettes, finishing up as the eighth best-selling album in the format. Now without a doubt a global star, Dua is also nominated for six Grammy Awards, including in the prestigious Record of the Year, Song of the Year and Album of the Year categories.

Other UK artists to make the Top-10 included Stormzy with Heavy Is The Head at No.5, Ed Sheeran with No.6 Collaborations Project at No.7, and Elton John’s Diamonds compilation. The top ranked international act was Billie Eilish, whose debut album When We All Fall Asleep Where Do We Go? made the year’s Top-5.  Kylie Minogue celebrated huge physical sales, with her 2020 album Disco the seventh biggest selling cassette of the year, and sixth biggest selling album on vinyl. IDLES and Fontaines D.C. both had continued success in the best-selling vinyl charts, with Ultra Mono and A Hero’s Death finishing tenth and seventeenth respectively.

The biggest-selling singles of the year were Blinding Lights by The Weeknd, Dance Monkey by Tones & I, and Roses by Saint Jhn. Lewis Capaldi had two tracks in the Top-10 with Before You Go (No.4) and Someone You Loved (No.8), while fellow Brits Dua Lipa, Joel Corry (with MNEK), and the Stormzy and Ed Sheeran Own It collaboration (with Burna Boy) also made the Top 10. Despite the disruption to the showcasing of new releases and artist promotion brought about by the pandemic, there were some UK artists who had their first No.1 albums in 2020 – Gerry Cinnamon, IDLES, Nines, Headie One, and Paul Heaton and Jacqui Abbott. Additionally, Joel Corry attained his first No.1 on the Official Singles Chart as well as being streamed over 200m times in the UK.  Many of these newly emerged artists – also including Aitch, D-Block Europe, J Hus and AJ Tracey achieved hundreds of millions of streams each in the UK alone in 2020.

1 The reporting year in 2020 comprises 53 weeks (ending 31 Dec 2020). It should be borne in mind that the year-on-year comparisons throughout are with a 52 week chart year (2019).  Without this extra week the year-on-year increase in Album Equivalent Sales would have been lower.

Consumption data reflects volumes consumed in 2020 (via streaming and purchases) only. Please note that volume growth should not be equated with growth in recorded music revenue – the 8.2% consumption growth reported may therefore not be the same as any growth in revenues generated by this increase in UK consumption. The BPI will report on UK recorded music revenues for 2020 in Q1/Q2 2021.

2 Album Equivalent Sales (AES) is a standard industry metric enabling sales & streaming volumes to be measured on a comparable basis so that total music consumption can effectively be gauged. This analysis converts all streams & sales data to 'Album Equivalent Sales' (AES). Physical & digital album sales have been included as per the Official Charts database, but the cumulative total for individual track sales has been divided by 10 (to provide a 'Track Equivalent Album' (TEA) figure). Both audio and video streams are now counted in the AES figure, but are weighted according to whether plays are derived from a ‘premium’ or ‘ad-supported’ source. Premium plays are divided by 1000 and ad-supported plays are divided by 6000 to comprise the ‘Streaming Equivalent Albums’ (SEA) portion of Album Equivalent Sales. As the AES methodology has been revised in 2020, the 2019 AES figure has been restated in accordance. 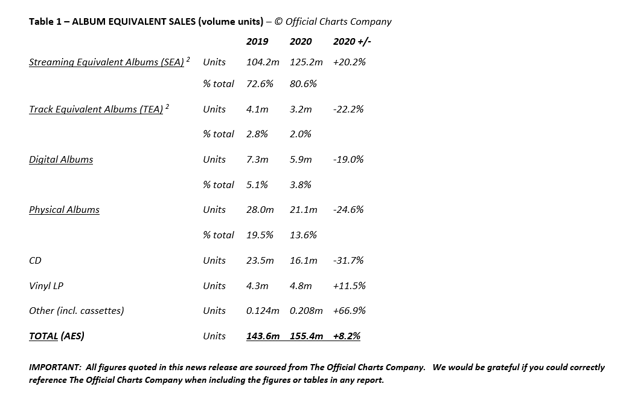 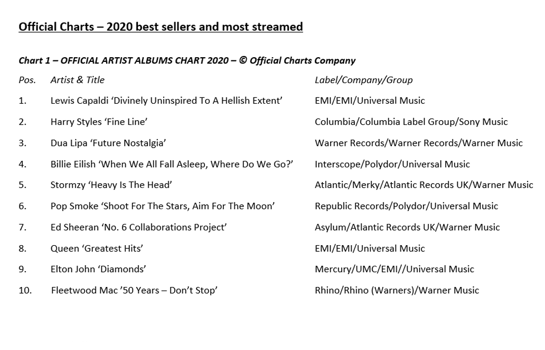 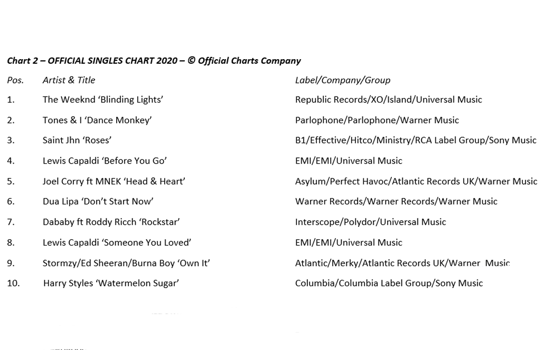 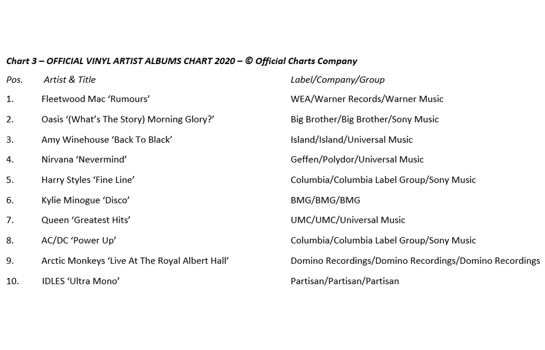 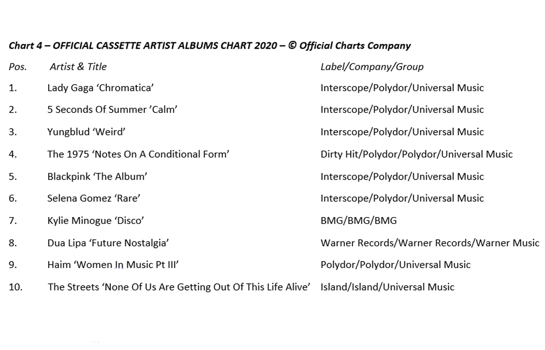 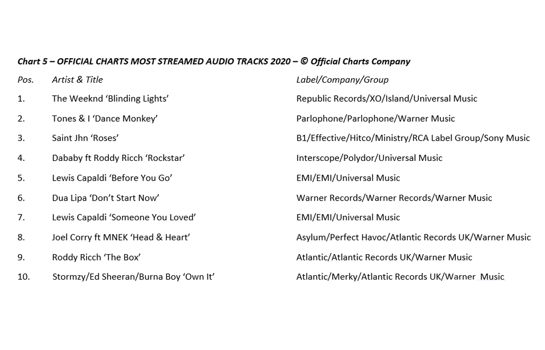