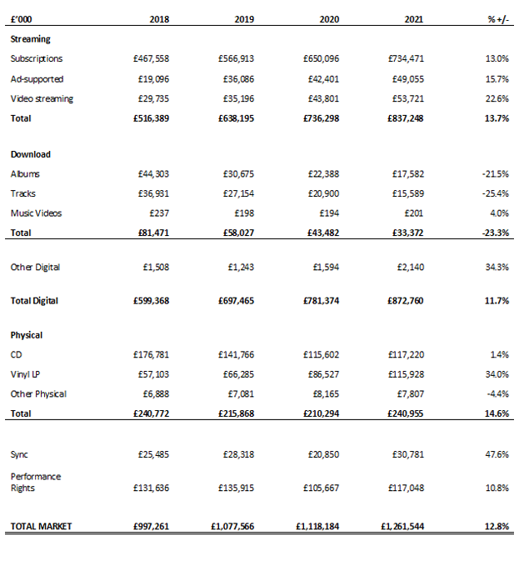 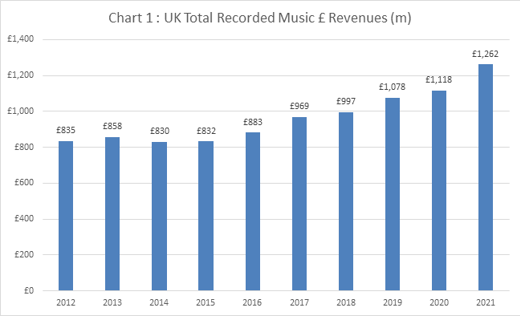 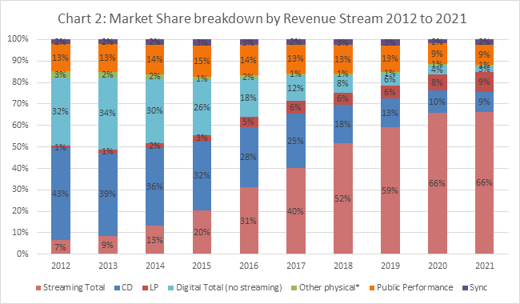 The BPI, the association of independent and major record labels, today reports that UK recorded music revenue1 rose by 12.8% in 2021 to reach £1.262 billion.

This marked the sector’s seventh consecutive year of revenue growth, led by streaming.  However, when adjusted for inflation, revenue in 2021 was £368 million below the 2006 CPI-adjusted figure of £1.63 billion, while using RPI the 2006 figure would have been £1.795 billion – £534 million higher than the 2021 total.

Revenue from streaming again fuelled much of the rise, up 13.7% to £837.2 million, with physical formats on CD and vinyl growing at a faster rate, also contributing – up by 14.6% to £241 million.  See Notes for more details. These figures coincided with an increase in the number of indie record shops, recently reported by the Entertainment Retailers Association (ERA), which grew went from 390 in 2020 to 407 in 2021.

Geoff Taylor, Chief Executive BPI, BRIT Awards & Mercury Prize, said:  “The UK music market’s return to growth has been driven by streaming – especially streaming subscriptions, which grew by 13% last year and made up 88% of streaming revenues and 58% of total revenues.  After a tough few years we are also pleased to see growth across the sector, including in physical formats, sync, performance rights and beyond. This growth yields important benefits for the broader music community, including greater remuneration to a wider base of artists and additional investment by labels in new talent. It is important to remember that even today we still have yet to fully recover from years of decline and that, in real terms, we remain a much smaller industry than 15 years ago. We urge the music community to join together to continue growing the market, for example by helping British music secure the largest possible share of streaming growth abroad.  That will be an effective way to maximise the success of British music creators and the ecosystem that supports them.”

Revenue of £837.2 million (up 13.7%) from streaming was shaped largely by paid subscriptions to streaming services (such as Spotify, Apple, Amazon and Deezer). This rose by 13% to £734.5 million.  Ad-funded streaming income grew by 15.7% to £49.1 million. Income from video streaming platforms, notably YouTube, showed some growth, up by over a fifth (22.6%) to £53.7 million – but is still well under half the amount generated by vinyl. Revenue from digital downloads continues to decline as substitution accelerates towards streaming. It fell by 23.3% in 2021, with downloaded tracks and albums generating just £33.4 million for labels.

While vinyl continues its amazing revival story, up 34% on the year, the gold star arguably goes to Compact Disc, which, off the back of superstar releases by ABBA, Adele, Dave and Ed Sheeran, contributed £117.2 million in revenue – a 1.4% rise on the year and the first increase since 2017. It means that CD still generates marginally more than vinyl for record labels and their artists, though this may change in 2022. Within the physical total, other formats such as cassette accounted for a fraction of the overall revenue total, but the format is keenly purchased by some collectors and its significance lies in pointing to the wide choice now available to fans in terms of how they can discover, collect and enjoy the music they love.

Revenues from ‘Sync’ and Performance Rights

Sync – music used in film and other soundtracks and in advertising – has been an area of revenue growth for labels in recent years up until the pandemic in 2020. This has shown signs of a healthy recovery in 2021, yielding £30.8 million (47.6%). Income from performance rights from music played in public remains substantial at £117 million, up by 10.8% on the previous 12 months.

As recent BRIT Awards have shown, a new wave of talent is breaking through, supported by their teams and labels.  Names such as Little Simz, Becky Hill, Joy Crookes, Arlo Parks, Sam Fender, The Lathums, Glass Animals, KSI and 2022 BRIT Rising Star Holly Humberstone are fast becoming known on the world stage. In 2021 they helped to drive streams and sales alongside returning global stars such as Adele, Ed Sheeran, Dave and ABBA. See Notes for 2021 Official Charts.

1 Record label revenues comprise income generated through streaming, purchases across physical and download formats, public performance rights, and ‘sync’ – music licensed for use in film & TV, games soundtracks and advertising. The BPI figures are based on a survey of its label members, with Official Charts Company share data used to account for non BPI label members. They are verified against data collected by the IFPI.