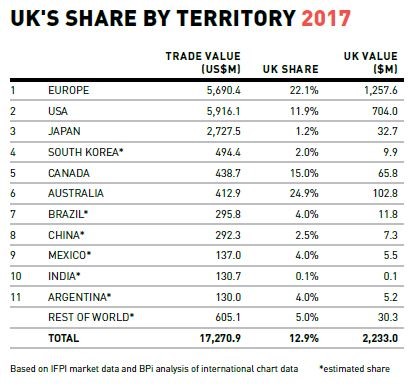 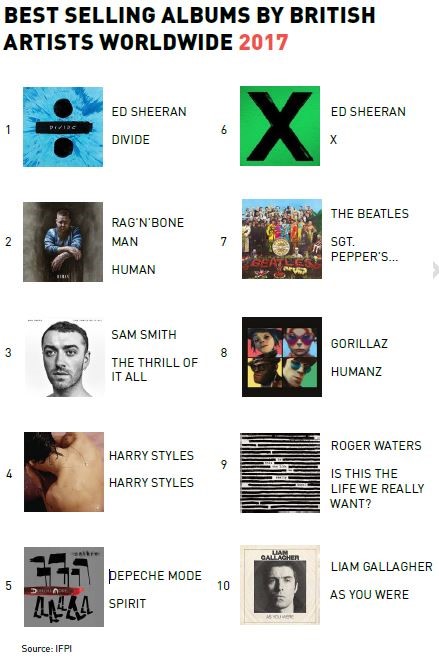 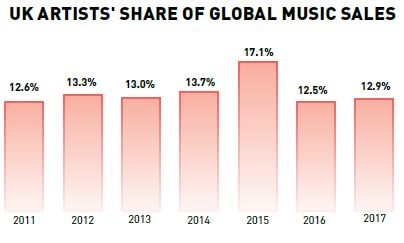 Consumption of British music, fuelled by strong demand for albums by Ed Sheeran, Rag’n’Bone Man, and Sam Smith, among many others, as well as classic acts such as The Beatles and Roger Waters, accounted for 12.9% of all the music purchased or streamed around the world in 2017 according to BPI research.

The BPI has conducted a market analysis of album sales in 11 of the leading 15 music markets of the world, including the big top 5 – The US, Japan, Germany, the UK and France. These markets account for revenues of $14.0 billion (at trade value), which represents 81 per cent of the global total of $17.3 billion according to IFPI’s recently published Global Music Report 2018.

British artists enjoyed their largest share of music consumption here at home – accounting for just under half (48.2%) of all UK album sales.  But they also thrived across Europe, where they were responsible for well over a fifth (22.1%) of consumption, and in North America, taking up over 1 in 8 album purchases in the US and nearly 1 in 6 sales in Canada.  In Australia the figure was an impressive quarter (24.9%) of consumption.

UK artists fared less well in markets such as Japan, South Korea, which are dominated by their own local repertoire.  Whilst estimated share in emerging territories such as China and India also remains relatively small, both markets offer huge potential.  In the past 12 months the BPI has partnered with fellow music body AIM and with the Department for International Trade (DIT) to host successful trade missions in both countries.

Ed Sheeran’s album Divide was the world’s biggest-selling album according to IFPI figures, topping the charts in much of Europe and across North America, Australia and beyond, as Adele’s 25 did two years ago.  Rag’n’Bone Man’s Human and Sam Smith’s The Thrill of It All were the fourth and fifth-biggest sellers respectively, whilst Harry Styles’ self-titled solo release topped the weekly charts in the USA, Canada and Australia.

The 50th anniversary reissue of The Beatles’ Sgt. Pepper was one of the best-performing albums by a UK artist, and the appeal of established acts such as Depeche Mode, Pink Floyd and The Rolling Stones remains undimmed. The international breakthroughs of artists such as Annie-Marie, Jax Jones and Jonas Blue also points to a bright future for UK music overseas.

Geoff Taylor, BPI & BRIT Awards Chief Executive, comments:  “British artists and their music continue to inspire fans all around the world.  This country has innovative, risk-taking labels that invest heavily in the best of British talent, promoting home-grown artists to global audiences on fast-growing streaming platforms such as Spotify and Apple Music.  In 2017, we maintained our exceptional share of the world’s listening, consolidating our position as the second most successful music nation on earth, exporting more music than any country after the US.  As Britain begins to chart its new course in international trade, it’s not idle hyperbole to claim that music has truly become Britain’s international calling card.”