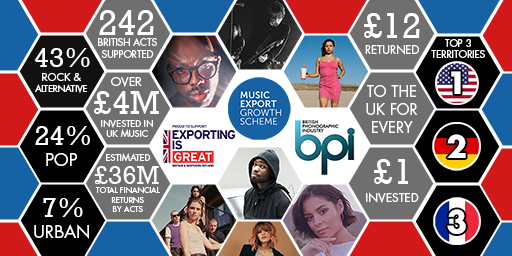 The Music Export Growth Scheme Impact Report 2019, published today by record labels association the BPI, reveals that over the scheme’s lifetime, £36 million in exports revenue has been generated for the British music economy – £12 for every £1 invested in the scheme.

Launched in 2014, the Music Export Growth Scheme (MEGS) is administered by the BPI and funded through the Department for International Trade as part of the Government’s Exporting is GREAT campaign. It is designed to boost British music exports by supporting small to medium sized music companies as they look to build on the potential of their artists in overseas markets.

To date the scheme has supported 242 successful applications (rounds 1-16), and the diverse range of artists who have benefitted have reported multiple business wins with 53 record deals, 47 publishing and sub-publishing deals, and 135 synchronisation licensing deals as well as a host of press and festival opportunities.

Applications totalling £24.5 million have been made to the scheme, with £3.8 million granted following rigorous application processes. Almost all the acts (94%) supported have been signed to an independent label, with just over half (55%) the funding supporting marketing and touring in North America, and around a third (35%) spent on promotional activity in Europe.

Geoff Taylor, Chief Executive BPI & BRIT Awards, said: “The Music Export Growth Scheme is a highly successful partnership between Government and the private sector promoting UK exports. Britain has a great tradition of promoting its music across the planet – the UK punches well above its weight as the largest exporter of music in the world after the US – and the Music Export Growth Scheme is an increasingly important foundation underlying this track record.

“I would like to thank The Department for International Trade (DIT) and the GREAT campaign – and the teams there – for their continued support and investment in the Scheme.”