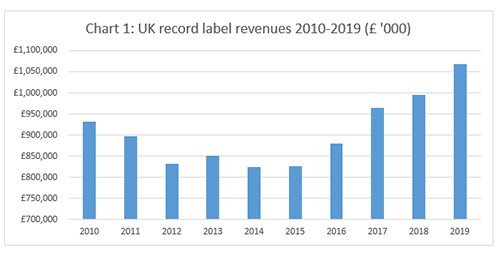 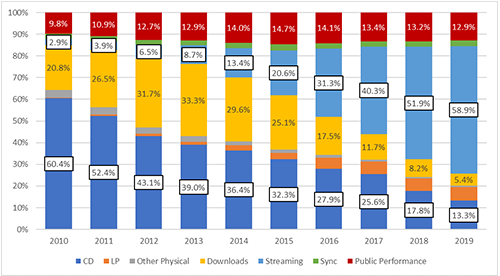 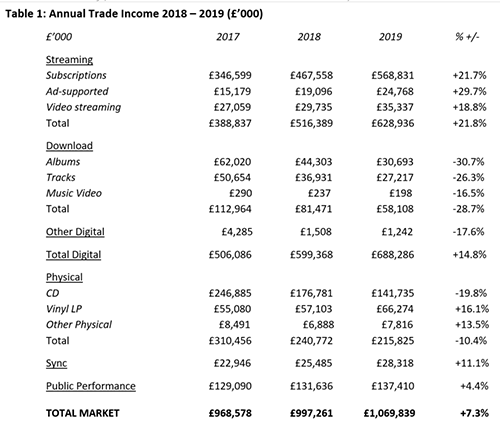 The BPI today reports that UK record label trade income rose by 7.3 per cent in 2019 to £1,069.8 million – marking the fourth consecutive year of growth and fuelled by the continuing increase in streaming income, which leapt by 21.8 per cent to stand at £628.9 million. This is the highest level of annual trade income in well over a decade going back to 2006, when the combined total was £1,166.2m.

Record label trade income is made up of combined revenues generated through streaming, sales of music across physical and download formats, public performance rights, and ‘sync’ – music licensed for use in film & TV, games and advertising.

“Watching British artists such as Stormzy, Celeste, Dave and Harry Styles at The BRIT Awards was a reminder of the fantastic contribution music makes to our national life. The music industry’s success is powered by record labels’ up-front investment and shouldering of risk, so it is important to the sustainable health of the music ecosystem that label revenues grew on last year’s results.

“But there is no room to rest on our laurels. In addition to the new challenges brought by the COVID-19 pandemic, British music faces intense competition at home and abroad, is undervalued by some tech platforms and is undermined by widespread illegal sites. In fact, total revenues remain more than a fifth below the post-Millennium peak recorded in 2001. It is time for a new partnership with Government to unleash the full potential of our music industry to benefit our culture and our economy.”

Today’s reported rise in revenues tracks the 7.5 per cent increase in consumption reported by the BPI earlier this year. Within streaming, ad-supported audio streaming revenues were up strongly by 29.7 per cent, and video streaming revenues also grew by 18.8 per cent, but fell further behind the growth of other streaming channels. Vinyl delivered revenues of £66.3 million – up 16.1 per cent on the year.

This continuing growth in revenues is welcomed, but in addition to concerns over the impact of Coronavirus, structural factors are holding back the recorded sector from realising its full potential to reclaim the peak levels of two decades ago.  Video streaming services failed to close the “Value Gap” in 2019, generating only just over half the income produced by vinyl records, while illegal websites, in particular P2P and “stream ripping” sites, continued to leach value from the recorded music sector online, estimated at £120 million per year.

Subscription represents the vast bulk of streaming revenues generated from services such as Spotify, Apple Music and Amazon Music Unlimited – responsible for 90.4 per cent (£568.8 million) of the 2019 total of £628.9 million. Income of £24.8 million from ad-supported tiers of audio streaming services now accounts for just 3.9 per cent of the streaming total – slightly below the £35.3 million (5.6% share) which video streaming ads contribute.

Streaming-generated revenues now make up the majority (58.8%) of record label trade income (with sync and public performance revenues included). Its significance to the industry is underlined by recent IFPI research, which reports that nearly 4 in every 10 (39%) adults aged 16 or above now use a paid service. This is in line with the most recent estimates from MIDiA Research (for Q2 2019) that put the number of premium streaming subscribers in the UK at nearly 20 million (19.8m).

Physical formats remain resilient, with vinyl now accounting for over 6 per cent of total revenues

Whilst mainstream music consumption is now largely digital, physical formats continue to enjoy a healthy, complementary relationship with streaming as a valued part of the music eco-system.

‘Sync’ earnings also on the up

Revenues of £28.3 million generated from the licensing of ‘sync’ music for use in film & TV soundtracks, games and advertising in 2019 represented an 11.1 per cent rise on the year. This reflected the impact of music in films such as Last Christmas, which featured the songs of George Michael and Wham!, Bohemian Rhapsody and Rocketman, as well as the widespread use of music in games and advertising such as the seasonal campaigns for John Lewis and Tesco.