Money has gone to organisations that promote education and wellbeing through music. The BRIT School in Croydon and Nordoff Robbins music therapy have been major beneficiaries, but many other charities have also benefitted. 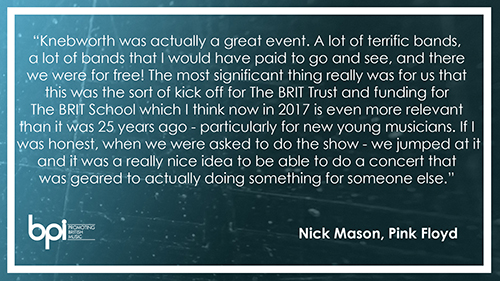 "The BRITs isn’t just about amazing performances and celebrating the best artists in the world. It’s also about raising money for people who deserve support." 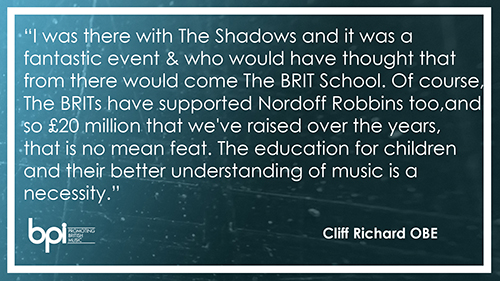 Money has gone to organisations that promote education and wellbeing through music. The BRIT School in Croydon and Nordoff Robbins music therapy have been major beneficiaries, but many other charities have also benefitted.

The BRIT Trust – the BRIT Awards’ charity set up by UK labels association the BPI with the aim of providing young people with opportunities in the music and creative industries – is proud to announce that it has now given out £20 million to many worthy causes since it was set up in 1989.

The biggest beneficiaries are The BRIT School for Performing Arts & Technology in Croydon and Nordoff Robbins, the leading independent music therapy charity in the UK, although many other charities have also benefitted.

The BRIT School was set up in 1991 as a unique joint venture between the music industry and government.  Since opening 25 years ago over 7,000 students have passed through its doors, including many artists who have gone on to achieve outstanding success in their chosen fields, such as performers Adele, Katie Melua and Leona Lewis, and most recently Mercury Prize shortlisted acts Loyle Carner and Kate Tempest.  It has also helped to train a number of highly successful actors, notably Tom Holland (Spiderman), Cush Jumbo and Blake Harrison as well as fuelling the creative sector with dancers, designers, producers and other talent.

The School was only made possible by proceeds from the Knebworth concert in 1990 which featured a host of iconic acts including Eric Clapton, Genesis, Elton John, Paul McCartney, Jimmy Page, Robert Plant, Pink Floyd, Cliff Richard and many more, and by continuing donations from the annual BRIT Awards ceremony.

The BRIT Trust has also made donations to a range of other good causes including War Child, Save The Children, Chicken Shed, The Prince’s Trust, addictions and mental health charity Music Support (of which Robbie Williams is the patron), Key4Life, Drugscope and many more. It has also helped support other educational establishments including Birmingham Ormiston Academy and the recently launched East London Arts and Music (ELAM) academy in Bromley-by-Bow.  Just last month the BPI launched its new BRITs Apprentice Scheme, offering the opportunity for young people of all backgrounds to get a foot on the ladder of the music industry, with 10 places funded in large part through The BRIT Trust.

Chairman of The BRIT Trust, John Craig OBE, said, “At the Trust we recognise how important it is to provide opportunities for young people to express their creativity, often through music. More than ever, in today’s society, it is critical to give students life skills that convert into jobs. Over the last four years 99% of students leaving the BRIT School have either gone into higher education or jobs within the creative economy.

“£20 million is an extraordinary figure and my thanks go to all the artists who have appeared at the BRIT Awards over the years, as well those acts who performed at Knebworth 27 years ago.  This sum has only been made possible through their generosity of spirit.”

Chief Executive of the BRIT Awards and BPI, Geoff Taylor, said, “The BRITs isn’t just about amazing performances and celebrating the best artists in the world. It’s also about raising money for people who deserve support.

“The music industry believes passionately in the power of music to improve people’s lives, and the whole business, from artists to labels, publishers and managers, will celebrate this important milestone. As The BRIT Awards approaches in February, we are looking forward to continuing to support the great work of the Trust.”

"The BRITs isn’t just about amazing performances and celebrating the best artists in the world. It’s also about raising money for people who deserve support."