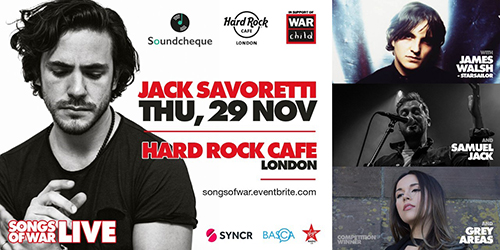 Soundcheque has announced the winning song of the inaugural ‘Songs of War’ competition as ‘Dear God’ by Grey Areas. A special live show, featuring the winner and other performers including Jack Savoretti will take place at London’s Hard Rock Cafe on Thursday 29 November in support of War Child UK.

The ‘Songs of War’ songwriting competition, organised by Soundcheque and sponsored by Hard Rock Cafe London in partnership with BASCA, SYNCR, and Virgin Radio, was launched to inspire the UK music community in commemorating the centenary of WW1, while shining a spotlight on the need to support children forced to live with the brutality of today’s conflicts.

On the winning song, Dave Stewart said: “The gentle piano approach to the song is  alluring, the second verse in this song is lyrically strong, honest and compelling with her vocal intensifying just enough to feel her anger and get the listener emotionally involved. I chose this song because of the honesty in the vocals and the lyrics mixed with the minimalist approach to the recording, God is there in the space between the notes.“

“The quality of songs was high across the board, but ‘Dear God’ by Grey Areas was outstanding – with heartbreaking, thought-provoking lyrics performed with such emotion and conviction that it stops you in your tracks.”

Joss Stone added about the charity: "If music can bring some awareness to something as important as War Child's work, then sing your bloody hearts out people! If your song can help current situations, even if it's just the tiniest bit, then pick up your guitar and play!"

The competition winner, Megan of Grey Areas said: "I wrote ‘Dear God’ in December of 2016, and I felt it really summarised my feelings about the state of the world as well as situations in my personal life. I felt — and still feel — strongly about what I wrote, and since then I’ve been contemplating what sort of artist I want to be. I decided I wanted to pursue some sort of charity work and support a cause I see as important through my music.

Through that journey, ‘Songs of War’ fell into my lap, and I had to take the chance of applying. When I found out I won, I was beyond thrilled. I can’t really put into words how honoured and excited I am to be able to hopefully positively impact people’s lives through my music by supporting War Child."

‘Dear God’ will be performed at a special live event at the Hard Rock Cafe, London on Thursday 29 November and Grey Areas will be joined by  Jack Savoretti,  James Walsh (Starsailor), Samuel Jack and Lucy Spraggan with more artists to be announced. The winning song will be introduced by war photographer and author of ‘Under the Wire’, Paul Conroy, portrayed by Jamie Dornan in the recently released film ‘A Private War’. Paul, also a songwriter, wrote the war-themed song ‘Take Good Care’ for Joss Stone and Dave Stewart and provided his war photography for the competition.

“War Child’s heritage has its roots in music and it’s a privilege to continue to work with the best artists to strive for a world where no child’s life is torn apart by war. The winner of the brilliant Songs of War competition joins the list of musicians such as Coldplay, Sam Smith and Florence + The Machine as a War Child artist performing and raising money for our crucial work.”

Sarah Handy, Head of Sales and Marketing at The Hard Rock Cafe, added:

“Philanthropy has been at the heart of Hard Rock’s business since 1971. We have provided financial and volunteer support across the globe to wide ranging causes including human trafficking, breast cancer research, hunger relief, homelessness, disaster relief, and much more. We continue to use the power of music to improve lives. Music is energy. It stirs emotions, inspires, connects and restores.  We are a brand that knows the power of music. It’s who we are. So we are delighted that Hard Rock Cafe London has been asked to be involved in this competition to raise awareness through the sound of music of the devastations created by war”.

As well as the opportunity to perform, the winner will also receive:

This is the first competition to offer mental health support for the winner to help prepare them for a career in the music industry.

Tickets and full details for the live event are available here: https://www.eventbrite.co.uk/e/songs-of-war-in-support-of-war-child-tickets-50594116364

For more information on the competition visit: