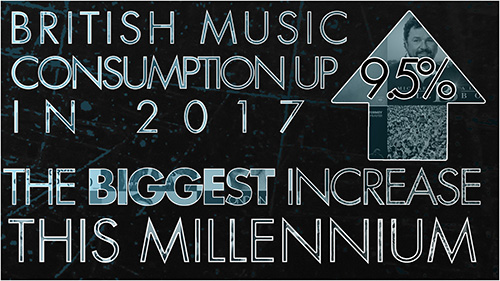 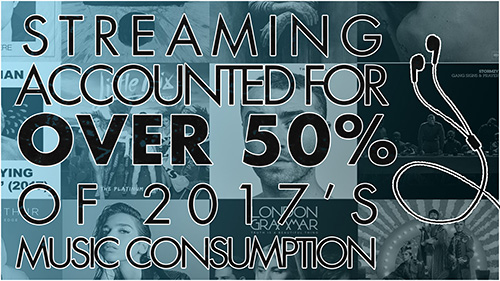 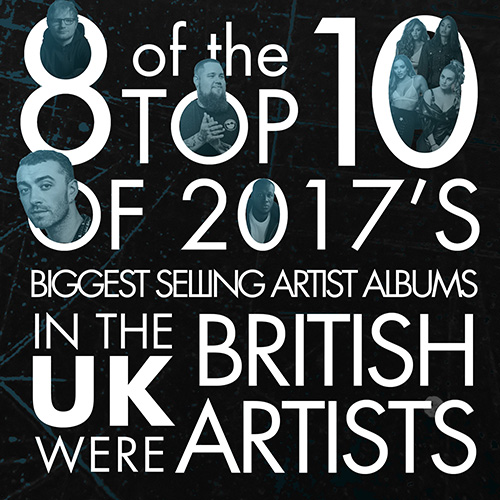 "The combination of new and old technology means the industry can continue to rise to the challenge of providing the public with music to treasure forever."
Matt Ingham, Cherry Red Records

Official figures released today by record labels’ association the BPI, based on Official Charts Company data, reveal a strong year for British recorded music, with UK consumption across all formats in 2017 growing at its fastest rate this millennium.

A total of 135.1 million albums or their equivalent were either streamed, purchased on physical format, and/or downloaded over the past 12 months.  This represents a 9.5 per cent rise on 2016 and marks a third year of consecutive volume growth.

UK acts accounted for eight of the top-10 best-selling artist albums in 2017, with Ed Sheeran leading another successful year for British artists by laying claim to his own personal ‘grand slam’. Divide was the year's most streamed, physically purchased (both on CD and LP) and downloaded album – marking the 13th year in a row that the best-selling artist album has come from a British act4. Ed also claimed the year's biggest single with Shape of You, whilst his hit Perfect gave him his first Christmas No.1 single to round off a remarkable year.

The strength of the home market was further underlined by the emergence of Rag’n’Bone Man as a major new force in British music alongside exciting solo acts such as Stormzy, Dua Lipa, J Hus, BRIT School alumnus Loyle Carner and Mercury Prize winner Sampha.  There were also impressive first-time No.1 albums from Liam Gallagher, Paloma Faith and Harry Styles, whilst Little Mix continued to power on as one of the UK’s most successful acts – their 2016 release Glory Days is heading towards 3x Platinum status and was in the year’s top five best-selling artist albums.  Sam Smith’s The Thrill of It All also made the year’s artist top-5 to consolidate his status as a major star around the world, while Michael Ball and Alfie Boe followed up 2016’s debut success with Together Again claiming a top-10 spot. Taking compilation sales into account, the Official Chart for combined albums featured three Now titles – Now 98, Now 97 and Now 96 – in the overall top-5.

“Whilst the rapid growth of streaming and resilient demand for physical formats gives us confidence for the future, it is important to remember that the music industry still has a long way to go to recover fully. Structural challenges must be overcome if long-term growth is to be sustained. First we must continue to fight the ‘Value Gap’5, so that all digital platforms pay fairly for their use of music.  Second, Government must ensure our musicians are able to tour freely even after we leave the EU. Finally, we should make the UK the best place to invest in new content by forging an online environment that is safe for consumers and where illegal sites cannot flourish.  If we do this, the future for British music, which is already one of our leading exports, will be very bright.”

The year’s strong growth in demand for recorded music was driven by a staggering 68.1 billion audio streams served through Spotify, Apple Music, Deezer and other audio streaming services.  This represents a 51.5 per cent rise on 2016 and a remarkable 1,740 per cent increase since 2012.

Streaming now accounts for over half (50.4%) of all domestic music consumption, and in December the market witnessed a new landmark of 1.5 billion audio streams in a single week6.  Ed Sheeran was the year’s most streamed artist ahead of Drake, with Shape of You the most streamed song and four tracks in the top- 10. Little Mix were the third most streamed, while Calvin Harris, Coldplay and Stormzy also made the top-10.

Vinyl LPs enjoy a decade of consecutive growth, with over 4 million copies purchased in 2017

Though still relatively small compared to streaming (50.4%) and even CD (30.8%), vinyl increasingly occupies a growing niche that now accounts for 3.0 per cent of the music consumed. The format has become part of an established multi-channel landscape where many consumers of all backgrounds appreciate the utility of streaming services to discover music that is new to them and which cater to their daily listening needs, whilst purchasing recordings by favoured artists on vinyl and CD that they may wish to gift, own and collect.

Ed Sheeran’s Divide was the most purchased album on vinyl LP (and on CD), ahead of Liam Gallagher, whose first solo release As You Were enjoyed the highest week one sales of the year and in over 20 years. Amy Winehouse’s classic Back To Black claimed a top-5 spot for the third year in a row, whilst Rag’n’Bone Man, Pink Floyd, The Beatles, Oasis and David Bowie were other British artists to make up the vinyl LP top-10.

Vanessa Higgins, CEO Regent St & Gold Bar Records, and an independent label member of BPI Council who heads up the BPI’s Innovation Hub, said: “Music is now made and enjoyed in so many ways, and this process is constantly evolving to create ever-greater choice. Smart speakers are just the latest innovation likely to have a transformative effect on digital music consumption and discovery, and how this develops may well be the story of 2018. As an independent label we look forward to continuing advancements in technology that will enable even more, smaller artists to produce new music and find their audience, not least on vinyl.”

“The music industry is in a permanent state of transformation. Genuine discovery is coming from the fresh resurgence in vinyl, the robust CD market and via the burgeoning streaming platforms. The combination of new and old technology means the industry can continue to rise to the challenge of providing the public with music to treasure forever.”

"The combination of new and old technology means the industry can continue to rise to the challenge of providing the public with music to treasure forever."
Matt Ingham, Cherry Red Records