British artists, blockbuster film soundtracks, vibrant streaming growth & resilient demand for physical formats combine to fuel a near 6% rise in music consumption in 2018 – the fourth year of growth in a row. 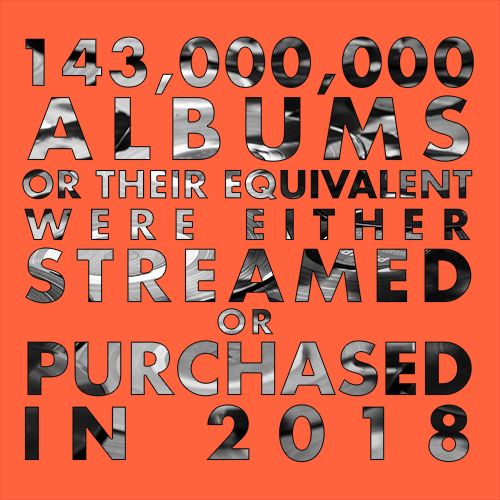 British artists, blockbuster film soundtracks, vibrant streaming growth & resilient demand for physical formats combine to fuel a near 6% rise in music consumption in 2018 – the fourth year of growth in a row.

Official figures released by record labels’ association the BPI, based on Official Charts Company data, underline the continuing strength and depth of recorded music in 2018, with UK consumption across all formats (combined) growing for a fourth consecutive year.

A total of 142.9 million albums or their equivalent were either streamed, purchased on physical format, and/or downloaded over the past 12 months – corresponding to a 5.7 per cent rise on the 2017 135.1m figure, and an estimated retail value of £1.33 billion.  Combined UK sales and streams of recorded music have now grown by over a fifth (22%) since 2014.

This continued growth builds on the strong market performance of recent years shaped by exceptional demand for Ed Sheeran’s Divide album in 2017 (3.2m lifetime sales) and Adele’s 25 in 2016 (3.5m).  It has also been achieved in the face of an increasingly challenging retail trading environment and uncertain consumer confidence, as underlined by HMV recently going into administration. Whilst 2018 may not have witnessed global smashes on quite the same epic ‘Ed’ and ‘Adele’ scale, the sheer breadth and depth of the music now being streamed along with continued purchasing of new and catalogue releases on physical format encourages the view that more people are consuming more music than ever before.

UK artists accounted for half of the top-20 best-selling artist albums in 2018, with George Ezra’s double-Platinum Staying At Tamara’s (No.2) the biggest-selling album released in 2018.  It led another successful year for British artists ahead of Ed Sheeran Divide, Dua Lipa Dua Lipa, Arctic Monkeys Tranquility Base Hotel + Casino, Rag‘n’Bone Man Human, Rod Stewart Blood Red Roses, Queen Bohemian Rhapsody – OST, Jess Glynne Always in Between, Paloma Faith The Architect, and Take That Odyssey.  Seventeen of the top-30 overall were by British acts also including Sam Smith The Thrill Of It All, Little Mix LM5, and Anne-Marie’s Speak Your Mind, which was the year’s biggest-selling debut – BRIT Certified Gold with over 160,000 sales.

Music consumption was further boosted by the exceptional performance of blockbuster movie cast recordings in 2018, not least The Greatest Showman, which, though released in December 2017, was the year’s biggest-selling title, selling well over twice the number of copies as its nearest rival and occupying the No.1 spot for almost half the year, beating Adele’s record for non-consecutive weeks at No.1 in the process.

The year’s top-10 artist albums also featured Abba’s iconic songs in the Cast Recording of Mamma Mia! Here We Go Again (No.4), and Grammy-nominated tracks by Lady Gaga and Bradley Cooper in the Cast Recording of A Star Is Born (No.7).  Queen’s catalogue benefited from the Bohemian Rhapsody biopic, with the film’s Original Soundtrack (No.13) appearing in the top-50 with The Platinum Collection and Greatest Hits. With biopics of Elton John and others due in 2019, the ‘music & film’ theme looks set to continue.

“2018 saw another strong performance from the British recorded music business as consumers deepen their engagement with music in its myriad forms. Complemented by collectible physical formats on vinyl, CD and super deluxe box sets, streaming services are enabling more people to discover, enjoy and instantly share music they love. Music’s global reach is also being extended by blockbuster movie soundtracks, such as ‘The Greatest Showman’, ‘A Star is Born’, ‘Mamma Mia! Here We Go Again’, and ‘Bohemian Rhapsody’.

“Britain’s innovative labels are playing a key role in nurturing the new talent, such as BRITs 2019 Critics’ Choice recipient, Sam Fender, that continually refreshes fans’ engagement with music. But, as we are already seeing, including with the news that HMV has gone into administration, continuing growth could be put at risk if a hard Brexit further harms consumer confidence or Government fails to ensure that all platforms using music pay fairly for it. If these risks are avoided, British music remains poised for further growth.”

Demand in 2018 was driven by a phenomenal 91 billion audio streams served through Spotify, Apple Music, Deezer and other audio streaming services.  This represents a 33.5 per cent rise on 2017 and a remarkable 2,350 per cent increase since 2012.  In 2019 it is likely the landmark of 100 billion streams in a single year will be shattered, not least with new streaming services having come fully online, such as the licensed YouTube Music, which launched in the UK in June 2018.

Audio streaming now accounts for nearly two thirds (63.6%) of all UK domestic music consumption, and in December7 the market witnessed a new landmark of 2.0 billion audio streams served in a single week.  Although Drake’s God’s Plan was the most streamed audio track of the year (Drake also had two other songs in the top-10: Nice For What and In My Feelings), there were six tracks in the year’s top-10 most-streamed that featured British artists, including at No.2 the global smash One Kiss by Calvin Harris and Dua Lipa (who also enjoyed individual streaming success with IDGAF at No.9).  Reinforcing the success of his No.1 second album Staying At Tamara’s, George Ezra underlined that he has truly arrived as one of Britain’s biggest talents by additionally claiming two of 2018’s most-streamed tracks – Shotgun (No.3) and Paradise (No.8). These Days – the collaboration by Brits Rudimental, Jess Glynne and Dan Caplen with US act Macklemore – also made the top-10, whilst relative newcomer Anne-Marie bubbled just outside of the year’s top-10 most-streamed tracks with Friends (with Marshmello) and 2002 to help cap another strong year for British artists.

Demand for vinyl, boosted by Record Store Day and the first National Album Day, continues to grow, though with production now running at close to capacity, the rate of increase is consolidating. Close to 4.2 million LPs were purchased – a rise of 1.6 per cent over 2017 and up by 2,000 per cent since the format’s low point of 205,000 copies sold in 2007.  LP sales remain at their highest level since the start of the 90s, with 12,000 albums released on vinyl in 20188.  Over 1 in 10 of all physical album purchases are now on vinyl format.

Though still a relatively small share when compared to streaming (63.6%) and CD (22.4%), vinyl occupies a healthy market niche accounting for around 3.0 per cent of music consumed, although its cultural imprint is much greater. The LP, which in 2018 celebrated its 70th anniversary, has established its place within a multi-channel music eco-system in which fans can discover and share music new to them through streaming, while many will purchase recordings on physical format by favoured artists they may wish to gift, own and collect.

Arctic Monkeys’ Tranquility Base Hotel + Casino was 2018’s most-purchased album on vinyl and was also the fastest-selling LP in over 25 years since charts records began in 1994, shifting 24,500 copies in just seven days upon its May release.  The Greatest Showman Cast Recording (also the best-selling CD), Fleetwood Mac Rumours, Queen Greatest Hits and Pink Floyd Dark Side of the Moon made up the top 5.  British acts George Ezra, Oasis, David Bowie and Amy Winehouse also featured in the top-10 vinyl best sellers of 2018.

Demand for CD, though still resilient, slipped by over a fifth. Whilst this is consistent with the long-term trend of recent years, it in part also reflected the steep year-on-year challenge of competing against the exceptional performance of Ed Sheeran’s Divide in 2017.  However, collectible super-deluxe and limited-edition box sets are helping to keep the format relatively buoyant, with reissues of classic work by Kate Bush, David Bowie and The Beatles (The White Album celebrated its 50th anniversary) in 2018 enabling physical formats to claim a larger share of retail spend than their unit consumption would suggest.

Along with The Greatest Showman and George Ezra, CD sales were also dominated by the Now compilation series with both Now That’s What I Call Music 100, which in July celebrated the 100th edition of the hugely successful franchise, and Now That’s What I Call Music 99 among the year’s top-5 best-sellers. Whilst growing from a very low base, there were also signs of a continuing mini revival for the cassette, with acts like The 1975 selling over 7,500 copies for their No.1 album A Brief Inquiry Into Online Relationships. Nearly 50,000 cassette albums were purchased – up 125.3 per cent on 2017 and the largest volume sold since 2004.

Iain McNay, Chairman Cherry Red Records, and an independent member of BPI Council, said: “2018 has been a fascinating year for the physical format, and labels that specialise in it saw an increase in sales.  Its metamorphosis into a collectable artefact has accelerated, and more physical releases, whether on CD or vinyl, now come as special-edition box sets. Collections are often aimed at the ‘super-fan’, whose numbers are increasing rapidly. The inaugural ‘National Album Day’, which the BPI and ERA launched with BBC Music, proved a big success, reminding music lovers of the depth of creativity that goes into a recording an album.”

Vanessa Higgins, CEO Regent Street Records, and an independent member of BPI Council, said: “Growth in music consumption and the strength of British artists on the world stage are energising success stories for labels. Whilst it is still challenging for smaller artists to break through the vast amounts of music available at our fingertips, 2018 has proved a galvanising year where the music industry has come together to demand fair payment from the big tech giants, via Article 13. Success in this area would make a big difference to the artists you know and love, and those yet to be discovered, who could be the soundtrack of your future.”