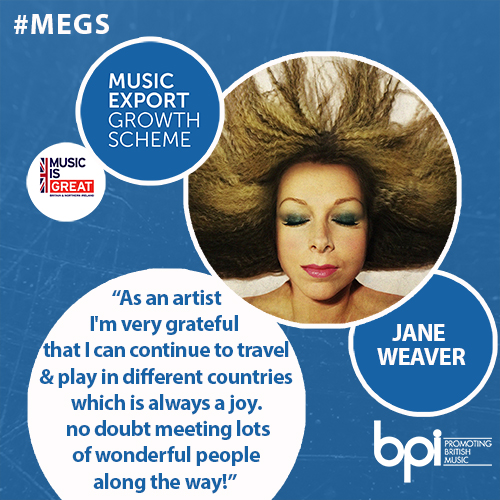 "The Music Exports Growth Scheme gives a diverse range of artists who have the talent, but not always the means to realise its full potential"
Chris Tams, Director of International BPI

Full list of MEGS recipients in the tenth round of funding:

The country’s up-and-coming music acts are being encouraged to set their sights on the world stage thanks to a Government export scheme.

In total so far, 162 acts have received more than £2.4 million of funding in their bid to become the next Adele or Ed Sheeran through the Music Export Growth scheme (MEGS).  The scheme which is jointly run by the Department for International Trade (DIT) and the UK record label association, the BPI, helps raise the international profile of developing British artists and their music companies.

To further promote UK music talents abroad, the Government is launching a trade mission to India at the start of February 2018 (1 – 7th). Based in Mumbai, it will help connect music talent with record labels and talent scouts and presents a significant export potential in the world’s seventh largest economy.

“The UK is a world leader in music exports and recognised for its exceptional home-grown talent around the globe. Through the music exports scheme, we help to nurture the talent of the future to explore new global markets.

As the Department for International Trade, we are launching a trade mission to India to connect music artists with investors in one of the world’s largest economies, ensuring the strengths of our creative industry sector reach audiences at home and abroad.”

“The Music Exports Growth Scheme gives a diverse range of artists who have the talent, but not always the means to realise its full potential, the opportunity to grow their fanbase in key international markets.  In the process it helps to promote the profile of British music overseas and, crucially, helps to boost our exports – so far to the tune of a 10 -1 return on investment for each Pound put in by the UK Government.”

‘It’s truly amazing to be selected for funding, this money will really help to make in-roads into mainland Europe. It’s been a while since I toured over there properly and this cash injection is not only timely but very much appreciated.”

“We'd like to thank MEGS once again for continuing to help us with what often prove to be very expensive overseas tours. On a limited budget such as ours (as is the case with almost every band in the independent sector, who need this kind of support), it really makes a difference. We'll carry on working hard at our end to justify the investment and make the most of the opportunity”

To date, UK music exports were worth £2.5 billion in 2016 and through the scheme, the country has seen a return of £10 for every £1 invested.

The Department for International Trade (DIT) , in partnership with AIM (The Association of Independent Music) and BPI (British Phonographic Industry), is launching the UK music trade mission to Mumbai, India, which will take place from 1st – 7th February 2018 and help connect music businesses and presents a significant export potential in the world’s seventh largest economy.

The grants, ranging from £5,000 to £50,000, are available to eligible UK based-music companies with a turnover of less than €50 million and fewer than 250 employees, providing them with an opportunity to enhance their profile in overseas markets, as well as develop their commercial potential.

Applications for the next round (12) of MEGS funding will be open for applications from the 8th January 2018 and will close on 5th Feb 2018.

"The Music Exports Growth Scheme gives a diverse range of artists who have the talent, but not always the means to realise its full potential"
Chris Tams, Director of International BPI

Full list of MEGS recipients in the tenth round of funding: