Read the All Around The World report here.

“We are at a pivotal moment for British music on the global stage. As the UK works to build back from Covid-19 and forge its future as an independent trading nation, music can play a vitally important cultural and economic role. Because of streaming, our country has a huge opportunity to connect artists with fans in ways never before possible.  There is a £1 billion prize to be gained for the UK, which would benefit artists, fans and the UK economy alike.

“We are today putting forward a plan to work with Government to support touring and showcasing by more UK artists and deliver substantial growth in music exports. SME and indie music companies will directly benefit and amplify the extensive work record labels do to develop and promote British music globally."  -Geoff Taylor, Chief Executive BPI. 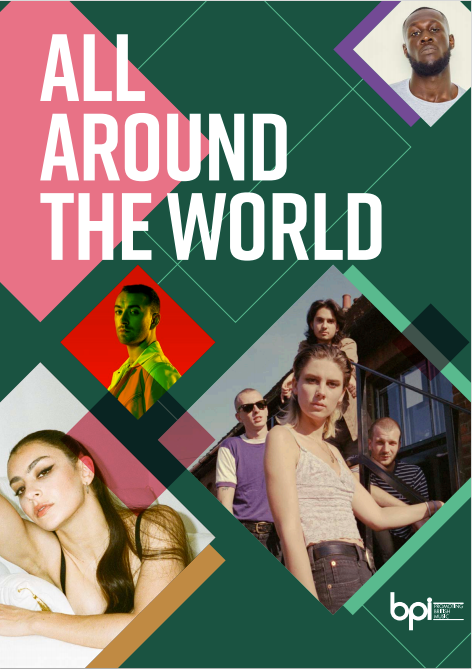 Read the All Around The World report here.

“We are at a pivotal moment for British music on the global stage. As the UK works to build back from Covid-19 and forge its future as an independent trading nation, music can play a vitally important cultural and economic role. Because of streaming, our country has a huge opportunity to connect artists with fans in ways never before possible.  There is a £1 billion prize to be gained for the UK, which would benefit artists, fans and the UK economy alike.

“We are today putting forward a plan to work with Government to support touring and showcasing by more UK artists and deliver substantial growth in music exports. SME and indie music companies will directly benefit and amplify the extensive work record labels do to develop and promote British music globally."  -Geoff Taylor, Chief Executive BPI.

The global growth in music streaming and Britain’s exceptional talent as a music nation is poised to push UK music exports to more than £1 billion a year by 2030, a new report by independent and major labels association the BPI reveals today.

With the UK forging its future as an independent trading nation following its departure from the EU, the BPI report highlights the huge global growth opportunities for British music and artists if Government works with the music industry to promote British artists overseas.

As emerging markets adopt online music streaming, global revenues from recorded music are forecast to rise to almost $40 billion (£30bn) by 2030.1 If UK music exports continue their growth rate as the market expands, they will surpass the £1 billion mark over the same period, more than double today’s level.  This would benefit not only artists and fans, by enabling greater earnings and investment into UK new talent, it would also help the recovery of the UK economy and boost the UK’s cultural influence as it pursues trade opportunities around the world.

Alongside long-established markets in Europe, North America and Australasia, where our music has traditionally been hugely popular, exports opportunities are now also growing in rapidly-expanding new markets across Asia and South America, while rising demand in Africa and in the Middle East adds new prospects for British artists and music.  However the expansion of the global streaming market also means stiffer competition, with smaller countries such as the UK having to work harder to gain a share of listening on streaming platforms world-wide.

The BPI calls on the Government to strike a new strategic partnership with the music industry to seize this exceptional opportunity, so that the full economic and cultural potential of British music can be realised.  In particular, Government should: support an expansion in the promotion of UK artists and music overseas, including through a renewal of the successful Music Export Growth Scheme2 to globally-promote artists signed to smaller independent labels; make the UK more attractive for investment by introducing incentives to music production here in the UK; and ensure that high standards of copyright protection are enshrined in trade agreements so the full benefits of exports can flow back to British creators and the UK.

Mercury Prize winners from 2018 Wolf Alice, who are one of over 250 artists to have benefitted from Music Export Growth Scheme funding as they built their international career, have added their voice to the BPI’s call for the scheme to be extended, saying:

“The global reach of British music gives us the ability to connect with fans all around the world, and the support that we had from the Music Export Growth Scheme early in our career was critical in us breaking through in key markets such as the USA. With streaming now growing fast even in emerging markets, we hope that other new British artists will receive similar support, so that British music can make even more of an international impact.” Please see notes for further artist quotes in support of MEGS.

The BPI sets out these opportunities and asks in a new report, All Around The World, which is published today.

The UK is a global leader in music – the biggest exporter of recorded music after the US, accounting for 1 in 10 music streams across the world.  To put this in context, the UK’s share of global music consumption is over 4 four times higher than its share of global GDP.

Backed by the creative A&R and marketing investment of their labels, superstar artists such as Ed Sheeran, Adele and Sam Smith – joined more recently by the likes of Dua Lipa, Stormzy, Lewis Capaldi, Harry Styles, Jorja Smith and Dave among many more artists – are leading a new generation of diverse British talent that is successfully harnessing the global reach of streaming to connect with hundreds of millions of new fans around the world.

Over 300 British artists are already achieving more than 100m global streams, with this number rising every year.

British recorded music exports reached £489 million in 2019, up from £211 million in 2010, and part of £6 billion total export earnings generated since 2000. Aside from the direct benefits to the UK economy, rising exports increase the ability of labels to invest in new talent and music. This boosts music consumption and ignites a cycle of growth that benefits artists, fans and all parts of the music ecosystem.  Growth is driven by label A&R investment, which at over £250 million in 2019 stands at a near two-decade high, while a further £150 million-plus went into global marketing. UK record labels consistently invest more in talent than most other countries, a commitment that underpins the UK’s international success.

The Music Export Growth Scheme (MEGS), funded by the Department for International Trade (DIT) in partnership with the Exporting is GREAT campaign and run by the BPI, is an important foundation of this success. Since launching in 2014, hundreds of artists, drawn largely from the indie community, have been backed in their overseas touring and promotion, boosting exports by £46.5 million – a return of £12 for every pound invested.

To realise the full potential for rapid exports growth, BPI is calling on the Government to provide vital support by:

All Around The World explores in depth the opportunities in key markets across the globe. In Europe – where countries including Germany, France and the Benelux play a key role in breaking new UK talent; in North America, which in 2019 was the UK’s single biggest music export territory; across Asia, where new markets such as Indonesia and The Philippines are fast emerging alongside China and India; in South America, particularly Brazil, and in Australasia, which has always been a vital market for UK acts.  New markets are also beginning to open across Africa and the Middle East. The report tells the story of what labels do to break an artist globally, and provides label case studies of artists including Gavin James, Catfish and The Bottlemen, Dua Lipa, Tom Walker, and Rex Orange County.

The BPI-administered scheme is funded by the Department for International Trade working in partnership with the Exporting is GREAT campaign.  It is designed to boost British music exports by supporting small to medium sized music companies as they look to build on the potential of their artists in overseas markets. Many smaller to medium-sized music labels, distributors and management companies, often independently owned, achieve success when launching their artists in the UK. But their limited resources means it can be a real challenge for them to replicate this success internationally.  This, in turn, creates the risk that significant commercial opportunities may be missed, not just for these companies and their artists, but ultimately for the wider UK economy through lost exports.  The Music Export Growth Scheme was created to help address this issue, offering small and medium-sized music companies with the potential to achieve increased international success the opportunity to apply for grants ranging from £5,000 to £50,000 that will support their marketing overseas and the promotion of specific artist releases.

Now in its seventh year since its launch in 2014, MEGS has awarded over £4 million in support of 282 diverse British music projects across a variety of genres including pop, rock, grime, jazz, folk, electronic, and classical. Some of the acts who have received MEGS funding include Mercury Prize winners Wolf Alice and Young Fathers, BRIT Award winners and Welsh indie rock band Catfish and the Bottlemen, jazz saxophonist YolanDa Brown, grime artist Ghetts, and the London Symphony Orchestra. Forty per cent of the funding awarded by MEGS has gone to female music acts or acts featuring female artists in their line-up, while nearly a quarter (24%) went to artists who are Black, Asian and Minority Ethnic. This funding has helped artists from across the UK to travel to countries in Europe, America, Asia and Australia. To date there has been a return of £12 for every £1 invested through the Music Export Growth Scheme. More details including eligibility and how MEGS works can be found here.

Beabadoobee said: "Thank you to the BPI for supporting what I do, especially right now it means the world and will help me and my team to keep making shareable moments.”

Jungle said: “The BPI continues to promote British across the globe and we feel honoured to be a part of that. Music has no borders.”

Kero Kero Bonito said: "BPI's funding both enables ambitious, original and life-enriching art and constitutes a genuinely robust investment in the UK economy. We're really proud to be part of a music industry that invests in bands who want to push pop music somewhere new; there are audiences across the globe craving fresh expression, as so many British artists before us have proved, and this grant will help us significantly in the next stage of our career. Thank you BPI.”